If you give a wife a mouse…

I’ve written before about my never-ending battle with my dog’s asexually reproducing fur and my suspicions that it has become self-aware, thus leading to rogue hair armies which are taking over my house in an Alexander-the-Great-esque manner.

Well, the battle has just been taken to the next level. I’m not quite sure how it managed to do it, but somehow Buffy’s fur temporarily defeated me by pulling a Trojan horse on Sunday. (But, you know, a Trojan horse on their level, which would be a mouse…they are only hair afterall, albeit evil villain overlord hair).

I should have known something was up. Ever since it’s gotten colder, the fur seemed to be retreating, staying at base camp located on my dog’s body in order to gather strength for the summer attack. Oh, how naive I was! Letting down my guard and growing lax in my sweeping defenses!

Which is EXACTLY what they wanted.

And which brings us to Sunday. In an effort to avoid writing or doing anything productive that would potentially result in a paycheck, I decided to do a quick Swiffer sweep just to make sure there was still a hardwood floor underneath the carpet of black fur (calm down, fellas…I know my domestic skills are wildly attractive but, alas, I am already taken).

And that’s when my highly astute observational skills, sharpened to a fine point thanks to my years working as a journalist, noticed that one hair clump seemed a bit bigger than the others. Upon closer examination, it also seemed that the clump had grown a tail. Naturally, my first thought was that the fur had evolved, having obviously managed to accelerate the natural process via experiments involving uranium or whatever that substance Wolverine is made out of.

But that was just silly. Where would the fur get uranium this time of year?

And that’s when it became clear just what I was dealing with. Underneath the fur was a real, live mouse.

Who had apparently entered our house using the fur as a disguise, having apparently been unable to find a tiny potted plant to sneak in behind. Either that, or it had been dead for so long, the fur had built up around it. And to be honest, I’m not quite sure which scenario is less disturbing.

I am proud to report, however, that I did NOT do the typical chick thing, which is to scream, jump on the table and do what can only be described as the “hibbity-jibbity” tapdance. Instead, I calmly walk into my husband’s office, calmly told him the situation, and then calmly climbed onto the back of the couch in a crouching position as I calmly held my dog out in front of me in a shield-like manner in anticipation of any aerial vermin attack.

I’ve always been fascinated by this particular disconnect in the women’s brain. In general, we love bunnies, squirrels, hamsters…pretty much anything that is small and furry and had a supporting role at one time or another in a children’s movie. So in theory, mice are in that same cuddly category. Not to mention, as children we grow up with Mickey Mouse, Jerry of Tom and Jerry fame and Speedy Gonzalez. Hell, the majority of Americans thought a rat cooking in a French restaurant was not only cute, but a worthy subject for a feature-length film.

But there’s a very good reason why mice don’t fall into that category in real life. See, outside or in a cage or anywhere that is not inside your actual house, a mouse looks like this: 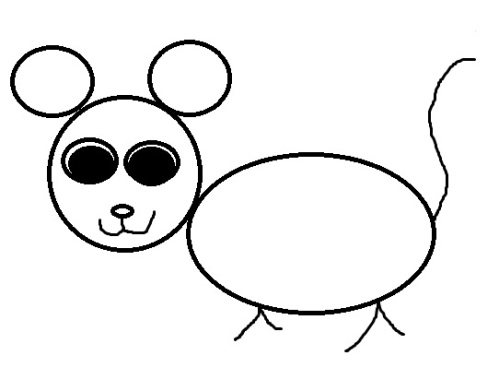 But once it’s inside your house, it turns into this:

Luckily, my very brave husband, armed with only a Swiffer, an empty beer box and a hockey mask, was able to trap the mouse and then set it free in our yard, where it can live a happy and healthy life devoted to coming right back into our house through the same hole it came in the first time.

And as for Buffy’s fur, all I have to say is…nice try, guys. You may have thought you could unhinge me by convincing an innocent (outside my house) mouse into some sort of suicide bomber mission, and yeah, I’ll admit it worked a little considering I now jump every time I see more than two individual hairs together in a corner, and yeah, I may have had a few nightmares involving mouse tails growing out of inanimate objects and perhaps my forehead, and yeah, I’ve spent the last three days scrubbing this house and my naked body with bleach and ammonia, and yeah, I may be “technically” sleeping in the car in freezing temperatures out of my fear a mouse will crawl into bed with me and eat my face off, BUT you haven’t won yet.

Cause I got a Lady Bic with the name Buffy written all over it.

3 responses to “If you give a wife a mouse…”