The year without a Santa Claus

There’s an infamous (at least for me) story from my childhood where I looked at my mom one day and just bluntly said “Santa Claus isn’t real, is he?”

And that was that.

But the infamous part came next. Because I went to school the following day and stood on top of my desk to kindly (and loudly) share this breaking news with all my second grade peers.

Surprisingly, this did not help my popularity.

And now, all these years later, the joke is on me. Little did I know that in my 30’s I’d still be dealing with this whole “does Santa exist?” controversy. Oh karma, you wily minx. Because see, now that I’m a mom, and need Santa to exist, I can’t find that bastard anywhere.

Let’s start at the beginning.

My son’s first Christmas, when he couldn’t have cared less (since his only interests back then were my boobs and old, gross, fast food receipts) we were lucky enough to randomly run into a Santa while out and about in early December. So we plopped our son down and took a million photos as you are legally required to do. Easy peasy. And they are photos we cherish to this day even despite the fact that both my baby and Santa look like they’re being held at gunpoint.

So, naturally, I just assumed that was how it worked. Last year, I figured we’d run into another one while out shopping or looking for a restaurant that sold spaghetti tacos (did I mention I was pregnant again?). We never did. Luckily, my son was still young enough that it didn’t really matter and I didn’t really care about anything except spaghetti tacos and not puking on random strangers whenever I left the house.

But this year, oh, this year, I came prepared. He’s almost three. And this is his sister’s first Christmas. Time to stop phoning it in as a parent. So, starting the day after Thanksgiving I started Googling where and when Santa would be. I was leaving nothing to chance.

Imagine my surprise then, when two Sundays ago, we went to meet Santa and he wasn’t there. Apparently “Santa will be taking photos until 5 p.m.” meant if you showed up at 4:30 p.m. he’d be gone on what I can only assume was a very important Santa emergency involving happy hour eggnog shots. Luckily, people working the event were super helpful and reassured us that they had “no idea where he was or if he’d be back.”

I was mad, sure. The Momma Bear in me wanted to start smacking people with my festive Santa hat. But I managed to keep my calm. We still had one more weekend before Christmas and my toddler got chocolate as a consolation prize, so crisis averted.

Still, again, I didn’t want to leave anything to chance. I checked, then double checked, then triple checked when and where Santa would be this past Saturday.

Santa would be hanging out in this particular location until 7 p.m.

Looking back, I should have known better. It was the same location that Santa had abandoned to go on a bender the weekend before. But, silly me, I thought if we showed up three hours before closing time, he’d be there.

Needless to say, I was frothing at the mouth at this point. And again, the helpful people working the event assured us that “um…I don’t know, man.”

So, again, my son got chocolate as a consolation prize. But I am running out of time and I need some chubby, red jerkface to sit on his ass and interact with my freaking children before I lose it. I need a photo of my baby girl screaming on his lap and one of my son doing that weird toddler smile where it looks like they forgot how to smile. It’s Christmas. Why the hell can’t I find a Santa? Why is this so hard? WHY AM I BEING PUNISHED FOR A MISTAKE I MADE WHEN I WAS SEVEN?!?

Sigh. This is a good lesson for you kids though. Apparently once you’re on the naughty list, you stay on that naughty list. Santa does not forgive nor forget.

What parents really want for Christmas

Christmas is great, isn’t it? Magical when you’re a kid. A celebration of the beautiful lives you’ve created when you’re a grandparent.

And a cheery tsunami that destroys your home, your finances and your sanity when you’re a parent. 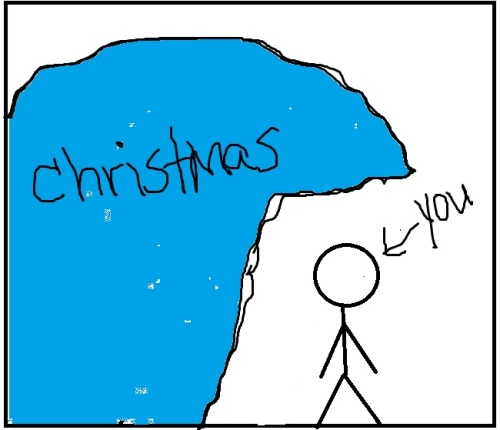 Of course, don’t get me wrong. I still love Christmas. The endless excuses to drink booze alone is enough to make any self-respecting writer love this holiday.

I just hate that I’m the one in charge of making it happen now. The decorating, the cooking, the gift buying, the logistics of holiday travel…sigh. And no matter how much I bribe my toddler, he refuses to take over the responsibility.

Is it any wonder that this time of year turns all of us parents into stressful balls of burning rage?

So, with that in mind, I decided to create a list of what I really want for Christmas this year. Because, sure, another sweater is nice, but the ability to go into a store without any meltdowns over a .99 cent candy bar is the gift that keeps on giving.

Number one with a bullet: A nap.

Number two with a tomahawk: Another nap.

The ability to wrap presents without a dog or cat lying on the wrapping paper.

The ability to wrap presents without losing the scissors every 30 seconds. Ditto the tape. And that stupid pen. IT WAS JUST HERE.

To eat an entire cheeseball on the couch alone as I watch “National Lampoon’s Christmas Vacation” for the fifth time.

Pets and small children who consistently admire the Christmas tree from a three foot buffer zone.

Actual snow on Christmas. And then we just fast forward to the month of April.

That my child forgets that VERY BAD WORD they think is hilarious to shout in public.

No lines. None. Not to buy gifts, not to see Santa, not to get overpriced holiday-themed lattes.

A working eggnog fountain (with extra bourbon) in the kitchen.

A worldwide shortage of batteries.

A worldwide surplus of wine.

Not getting further into debt.

Christmas tree lights with anti-tangle technology and a lifetime guarantee for each individual bulb.

Time to read all those books I got last year as presents.

A machine that dresses my children in winter gear so they can go play in the snow while I sip coffee and flip through a magazine.

More time to cuddle with my kids, less time cleaning up their room and explaining why we don’t take the marker and color all over Momma’s unattended watch when she’s in the other room.

And world peace or whatever. I guess.