Possibly the lamest trilogy of all time…

I don’t know if you’ve been following my Bumblebee and Wasp Saga but if you have, good news! It has now just turned into a trilogy.

(And if you haven’t, you can read the first part here and the second part here).

But just to sum up real quick, my back porch has been taken over by a bumblebee and a wasp who are not only working in CAHOOTS to keep me away from my own rightful property, but who have also given my dog PTSD after a disastrous attempt to take it back.

Well, recently it’s been quite rainy, so both sides retreated back to their respective base camps for the past week or so. Today, however, is an absolutely gorgeous day so, figuring they had either died (how long can their life spans be anyway?) or found someone else in the neighborhood to torture, I decided to go enjoy the sunshine on MY back porch.

But just as I was about to open the porch door, I looked up and saw this staring back at me through the glass: 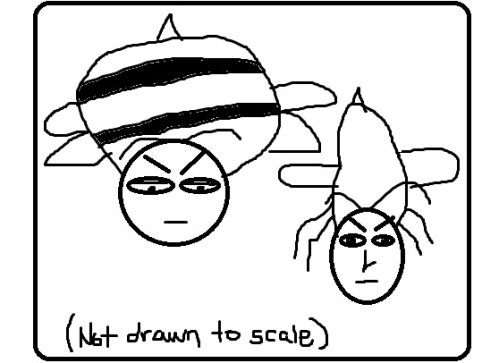 Better yet, my dog, who was happily about to follow me out, also saw them glaring at us from the other side of the door. And when he did, he quickly backed up, ran out of the kitchen and is currently quivering on my bed.

Now, if I was a real adult, I’d just go out there with a broom or possibly a grenade and kill the little bastards. End this ridiculous stand-off.

But I’m not. And so instead, I slowly backed away, grabbed a napkin and waved it in the air.

And consequently, I will be spending my entire summer indoors.

UPDATE: The Battle for the Back Porch continues…

Three days ago, I surrendered my back porch to two power-hungry and maniacal winged insects (which you can read all about here if you missed my last blog post).  But now, after hunkering down inside my house with my tail between my legs, I had had enough.

I was going to take back my territory if it was the last thing I did. So I decided to go nuclear on their asses and bring in my secret weapon:

Yes, I figured if anything could defeat my sworn enemies, it would be my dog, a fearless creature who will eat ANYTHING (except, of course, for cheap dog food).

Or at least I thought so up until a few minutes ago, when Buffy and I stepped outside and this happened: 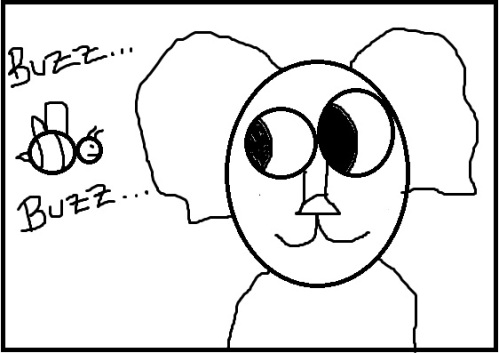 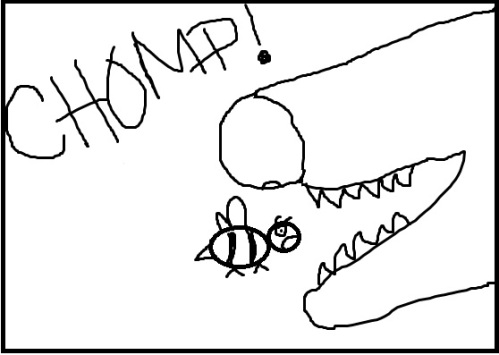 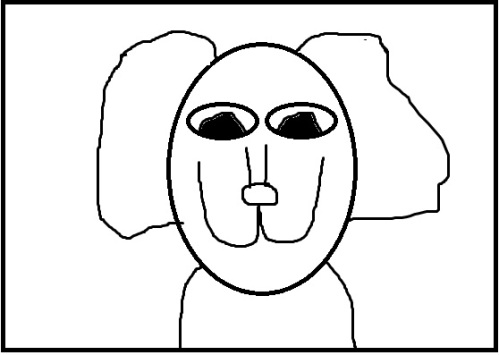 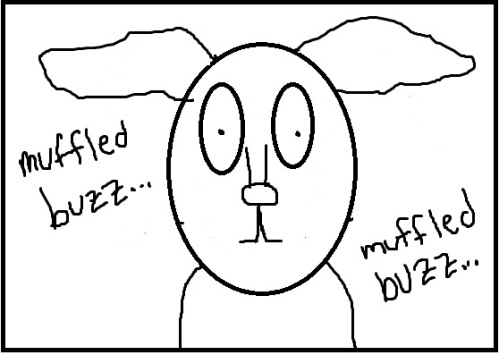 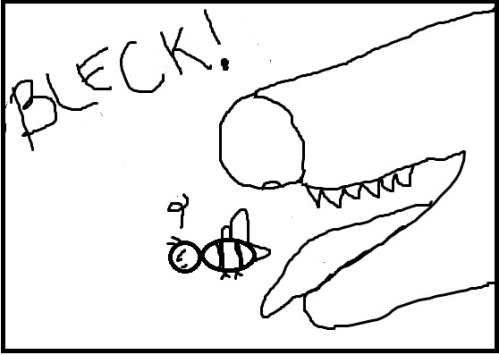 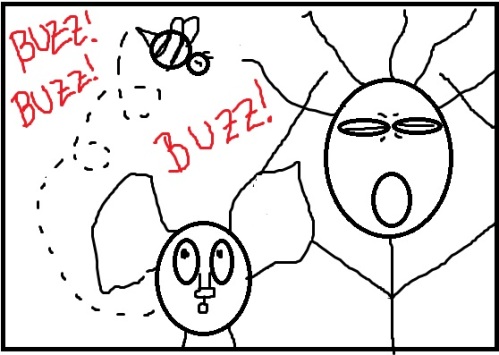 Yeah. I’m pretty sure we have to move now.

Tagged Buffy, bumblebees, dog vs bumblebee, funny, how to get rid of wasps, humor, wasps

So, this just happened…

I just surrendered my back porch.

I’m…I’m not even sure how it happened. One minute I’m sitting out there with my cup of coffee, enjoying the spring sunshine, and the next…well, the next I’m on the losing side of a vicious battle I didn’t even know I was involved in until it was too late.

But perhaps I should start at the beginning.

Everything you’ve ever read about me and insects is true (I know this for a fact since if you’ve read anything about me, it was written by me since I am the only one who feels I am important enough to write about). At this point, I’ve had so many epic battles with bugs and other vermin that I’m practically a seasoned four-star general (that loses a lot, including losing three and a half of her stars).

So you would think at this point, I’d be used to it. But I’m not. Which is why when a seemingly friendly bumblebee tried to become all buddy-buddy with me by invading my personal space, the following happened: 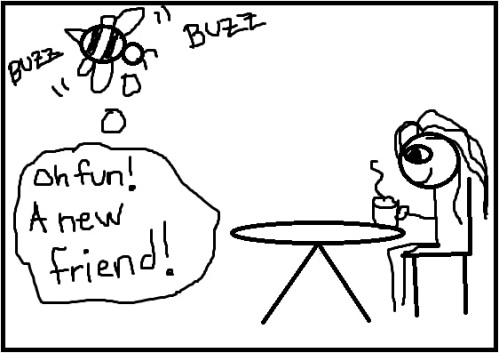 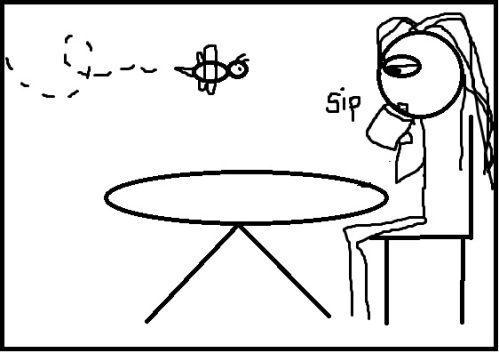 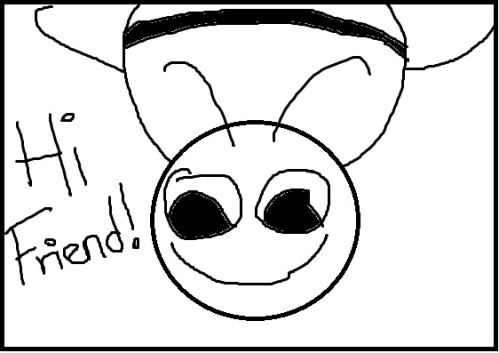 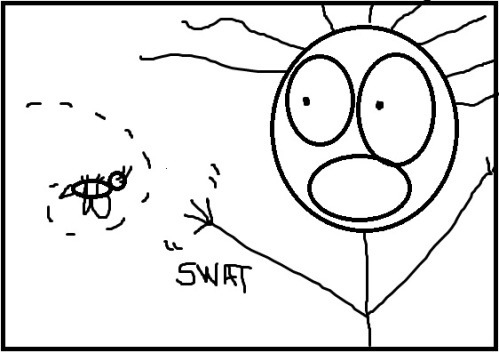 Sure, the bumblebee probably meant no harm. But I’m a big believer of there is a reason Nature was invented and that reason is so bugs have some place to live far away from me so I don’t have to see their stupid faces.

Now, that whole episode in and of itself wasn’t that big of a deal. But then, not even five minutes later, a wasp decided to check out the situation. Which is when this happened: 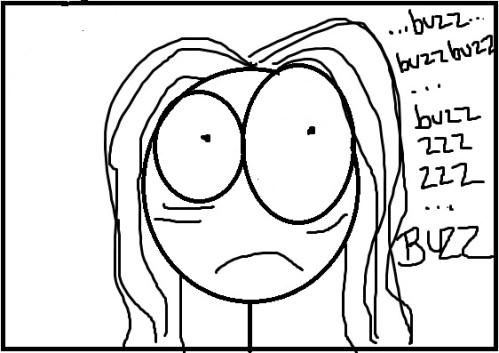 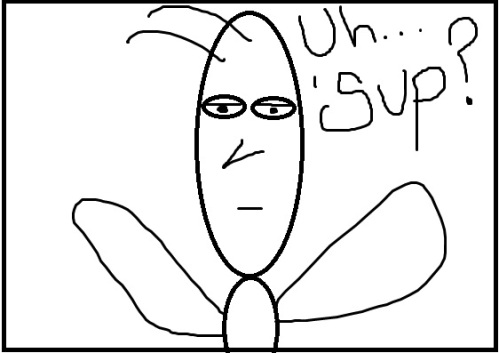 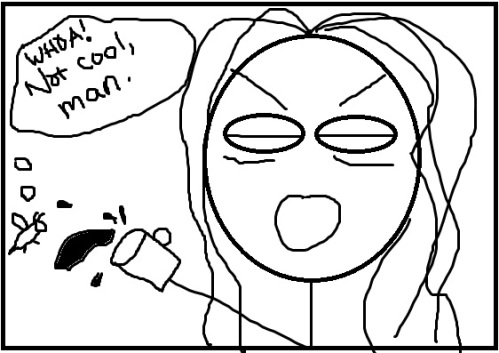 Then it got quiet.

A little too quiet, if you know what I mean.

And then, just when I thought it was all over, that’s when, for the first time in recorded history, a wasp and a bumblebee put aside their differences (and century-long feud over whose stinger was bigger) to come together to defeat a common enemy.

Granted, I can’t be too sure of the details considering they hatched their plan out of my sight, but I’m pretty confident what happened next is the bug version of an ’80’s movie montage, which I would love to draw for you if it weren’t for my lack of artistic skill in trying to create a believable dressing room. So instead I will simply describe the montage:

SCENE ONE: Bumblebee and Wasp, both indignant over my treatment of them, spread out a blueprint of my back porch and look very serious while pointing at things and sticking pencils behind their ears.

SCENE THREE: Obligatory dressing room scene where they take turns coming out of the dressing room dressed in different military/ninja/soldier gear while the other one shakes his head no, followed by one coming out in a ballroom dress (for some cheap laughs), finally followed by the perfect outfit, which is exactly what they were wearing before.

SCENE FOUR: The two of them sawing some wood and using those fire thingies that weld stuff and you have to wear those creepy masks like in “Flashdance” that I was never allowed to use in shop class after a completely innocent incident where Pete Mackleroy’s hair caught on fire.

All of which culminates in the following ingenious plan: 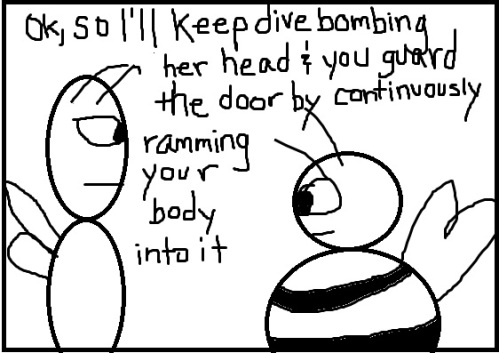 Yes, for no less than 15 minutes, I was held hostage in the corner of my porch while these two played out their evil plan. They had even anticipated my counter-tactic of crawling across the porch floor, military-style, in a desperate bid to reach the door.

It’s all kind of a blur now, but somehow, by some miracle and no shortage of pure, unadulterated bravery on my part, I managed to finally run inside and slam the door behind me, leaving them glaring at me from behind the glass.

And that’s where they still currently are. Manning their posts. Refusing to let me back outside. And laughing their tiny, stupid, bug-faced laughs.

I guess I really only have myself to blame. I did strike the first blow.

Although, if my friend Billy is right, this whole harrowing experience was actually a conspiracy, with the bumblebee and wasp running interference for some shady caterpillars cooking up meth in the corner. 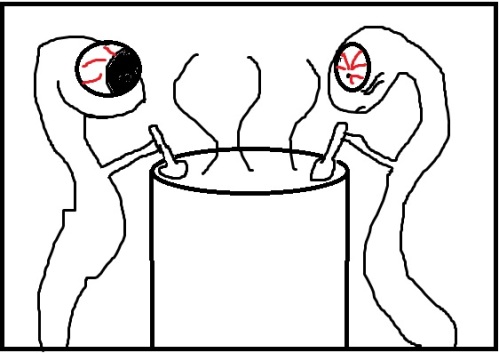 P.S.: The battle is far from over…check out my update on the situation here.

Tagged back porch, bugs, bumblebees, funny, how to get rid of wasps, stingers, the war on bugs, wasps