I blame ice cream. You ever have ice cream? Of course you have. You’re not dead. Or stupid.

So you can probably understand where I’m coming from when I blame ice cream for my hatred of vegetables. You feed my 3-year-old mouth that magical creamy substance made from unicorn laughter and puppy dreams and then a few hours later expect me to be happy when you shove some green beans in there?

As you can see, my relationship with vegetables was tumultuous starting at a very young age. There was the Great Tomato Stand-Off when I was 6, where my mom and I sat staring at each other from across the table for hours, a lone tomato slice sitting in between us. After what felt like a lifetime, the tomato slice was gone but I had vowed to never eat another tomato as long as I lived. A vow I took with my hand resting on “The Children’s Illustrated Bible” so my mom knew just how serious I was about it.

There was the Epic Onion Picking Out Adventure of 1993, where I methodically deconstructed my Taco Bell burrito and then hunted down every single tiny chopped onion there within when the cruel, uncaring teenage workers messed up my order.

And then there was the Legendary Mushroom Vomit Incident in high school, which for your sake, dear reader, I’ll leave the details up to your imagination. (HINT: It was gross).

Of course, as I’ve gotten older, it’s gotten a little bit better. For example, my husband finally convinced me to try guacamole, a major feat considering my inherent suspicion of any and all things green. I actually ended up loving it, so much so that my husband hasn’t had so much as a bite of the stuff since then because I grab it out of the waiter’s hand every time we go to a Mexican restaurant and guard it with my body like Gollum protecting his precious.

I also now like hummus, once I found out that hummus is not the same thing as haggis (Google “haggis,” kids, if you never want to sleep again).

I even will voluntarily eat a salad from time to time, as long as the main feature of said salad is meat of some sort.

But despite these advancements in my palate, I am still at heart a carnivore. So much so in fact, that while most food pyramids looks like this.. 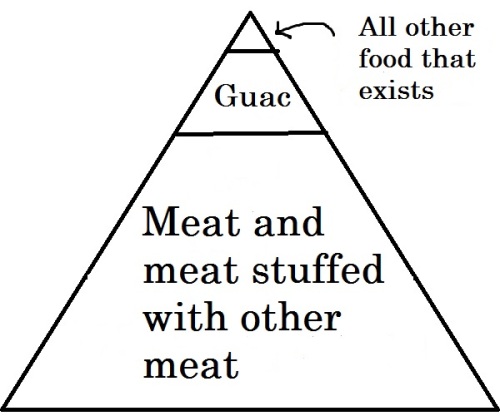 Meat is my first love and is the main staple of all my meals. The rest of the stuff on the plate? Garnish, pretty much. For example, here’s a typical conversation between my husband and I:

Him: “What do you want for dinner?”

Me: “I don’t understand the question.”

Which is why when my friend DeDe came to visit me here in Boston a few weeks ago and informed me she was now a vegetarian, I entered full-on freak out mode. Not because she was a vegetarian. I had plenty of friends who were vegetarians. And some vegans. And even for awhile some who were hardcore raw foodists.

No, I was freaking out because I had never had to feed a vegetarian for a week. I kept trying to think of meals I could make for her but my limited knowledge of the food in the produce aisle hindered my attempts significantly.

“Is corn a meal? Can I just make her corn? Or…um…salad? But what else goes on salad besides meat? Is chicken considered meat? I guess I could do something with a potato. But do people actually eat potatoes without bacon bits? Oh god, she’s going to starve to death!”

Luckily, I eventually figured it out.

I did make her a lovely eggplant parmesan (or at least I think it was lovely…I have no idea how it was actually supposed to taste), where I discovered that eggplants are not that pretty purple color all the way through much to my disappointment. We also ate out a lot. And ordered a lot of delivery cheese pizza.

And the girl probably ate more fruit than is healthy for a human since the other options in my fridge were less than desirable (“Hey, here’s some cottage cheese. It expired three years ago but it’s probably fine”).

But the point is, she survived. And I survived. And thanks to this experience, my horizons regarding food have been widened even further. I mean, who knows where it could go from here? Maybe now I’ll even figure out how you’re supposed to eat that zucchini that’s been hanging out in the back of my fridge.

Or is it a cucumber?

Oh, nope. You know what? I bet it’s that leftover corn on the cob from last summer.

One response to “Veggie Tales…of HORROR!”