I have a confession to make. And I realize by confessing this, there is a very good chance I will be thrown against the closest available car hood, handcuffed in the non-kinky way and hurled into one of those torture cells that don’t let you fully stand up by a mob of lithe, blonde, yoga moms who all became friends via Pinterest.

But, consequences be damned. I have to get this off my chest.

My baby, my beautiful, amazing baby, turns one-year-old in less than two weeks.

OK, Heather, Stacy and Taylor, you can put the handcuffs on now.

The worst part is that this lack of planning isn’t even something I can blame on the baby. (Although if anyone asks, that’s exactly what I’m going to do. The only reason to have children is so that you have a cherubic-faced scapegoat readily available for any and all occasions). 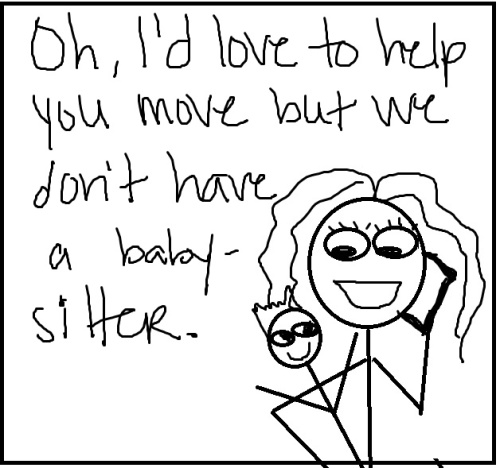 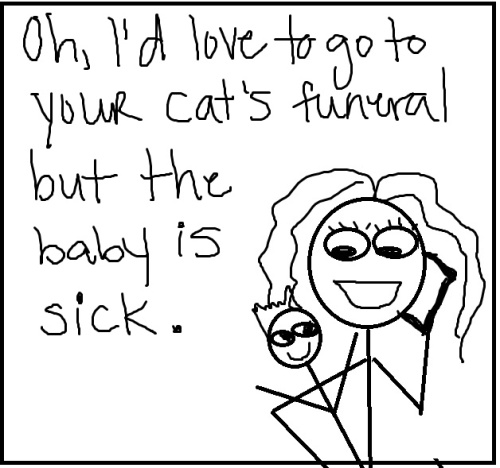 It’s not like he’s kept me so busy I couldn’t find a spare minute or two to make a list of people to invite. And then write out those invitations. And then plan a menu to feed all those people. And then a separate menu list just for the booze (because I think it’s cruel to invite people to a kid’s birthday party without offering them copious amounts of alcohol as compensation for showing up). And then, like, games or some crap for the people who show up with their own demon spawn. And then bake a fancy, Spiderman-themed, three-tiered, professional-looking cake that according to Facebook every other mom is capable of not only doing but doing while also making it vegan and gluten-free.

Technically, I do actually have the time to do all that stuff if I really wanted to (although it would be a great personal sacrifice considering it would severely cut down on my “X-Files” marathon watching time). And I really do want to celebrate this important event in my son’s life. I mean, he’s my favorite person in the world and I’ve celebrated far lesser events in his life so far, such as the day he got more than half of the green beans on his plate into his mouth as opposed to on the floor.

But the reasons I haven’t planned anything yet are because:

I know, I know. None of that should matter. According to modern mommy standards, I should still throw a huge party complete with organic balloons and artisan party favors and an exotic, free-range petting zoo and little marshmallow Olaf appetizers, even if the invited guests are all non-baby-having grown-ups who probably have better things to do on the weekend.

However, a part of me, the selfish part, would rather celebrate the fact my husband and I kept him alive for an entire year. I mean, my baby did absolutely nothing to help himself get to this milestone. If anything, he worked actively against surviving to the one-year mark.

But even I know it’s wrong to hire a babysitter to watch your baby on his birthday as you two go out to the bar to celebrate your parental prowess.

So, just how will we celebrate Riker’s birthday? I still have no idea. But I’m sure I’ll think of something the day before and drive myself insane trying to put it together in 24 hours.

And then just scrap the whole idea entirely three hours before showtime and text everyone to meet us at Chuck E. Cheese.

Or the closest available semi-kid-friendly bar.

I had no idea, you guys. No idea. I was ready for the sleepless nights, the dirty diapers and even the ass-numbingly dull act of reading the same stupid children’s book over and over again. But nothing, NOTHING, could have prepared me for the power that comes with parenting.

And I’m not just talking about the immense physical power you have over a baby. Although I think we can all agree it would take very little effort on your part as an adult to kick a baby’s ass. I mean, sure, their little hands are always balled up in tiny fists, but most babies can’t throw a decent punch. So right there you already have a pretty big advantage. Plus it’s pretty difficult to execute a decent roundhouse kick when you can’t even hold your head up properly.

And I’m not even talking about the almost god-like power that comes with you being the only thing standing between your baby and certain death. They count on you entirely for food and shelter and clothing and hitting that button on their toy that starts the music. (They’re not like cats. You can’t just put them in a crib with a bunch of bottles and a litterbox and leave for three days. They’re much more like dogs in that they will alert you every five minutes with their status update. Hungry now. Want attention now. This ball appears to be stationary and I’d really like it not to be now). In fact, a baby’s survival rate without your direct interference is pretty low.

But even so, the greatest power you hold as a parent is that you are your child’s first and most important teacher. Seriously, these kids come out of the womb knowing nothing. They haven’t even heard of the Kardashians yet. You have to teach them EVERYTHING. (Well, everything except how to suck on a nipple and how to poop in the tub, both of which they do automatically by instinct).

As a new parent, this is a pretty intimidating thought. One, because with that much power, it’s very hard not to become corrupt. History has taught us that. Absolute power corrupts absolutely and whatnot. I mean, just think how easy it would be to teach them that the sky is called a nurple and that they should call your mother Dave instead of Grandma. If you think about it, there’s really nothing stopping you from doing this besides basic human decency and the priceless look on Grandma’s face when junior yells “Hi, Dave!” across the restaurant pretty much trumps that.

And two, that much power leaves a lot of room for mistakes. Take, for example, how my husband and I have accidentally set back our son’s language skills by years, if not decades.

It all started innocently enough. About three months ago, when Riker was at that stage where he was smiling but not quite laughing yet, we were doing everything short of standing on our heads to get him to giggle. Goofy dancing. Silly songs. Some Louis C.K. jokes while standing in front of a brick wall.

And then we did stand on our heads. And then we stood on each other’s head.

Just the vacant stare of a baby who is wondering just how crappy of a person he was in his previous life to end up with these two yahoos as parents this time around.

But just when we were about to give up and face the reality that we gave birth to a tiny Ben Stein, we finally discovered his particular brand of humor: The Horsey Noise.

Yes, for this kid, that sound when you vibrate your two lips together like a horse’s neigh was the height of comedic genius. He just laughed and laughed. And so we kept doing it. Because once you hear your baby laugh, you never want that sound to end. We did it 50 times in a row. And then another 100. He would just laugh and laugh and then poop and then laugh some more.

It’s gotten to the point that I know we should stop but I worry that if we do, it may cause some severe psychological damage. The Horsey Noise is the first time we’ve been able to verbally relate to each other. So suddenly no longer doing it back to him would be like your parents having spoken to you in French your entire life and then suddenly addressing you in Chinese with no explanation.

And he’s just so proud he finally mastered Horsey Noise. I can’t take that away from him.

So, obviously there’s only one solution. Everyone is just going to have to make Horsey Noise their primary language. Even Dave.