I have a confession to make. And I realize by confessing this, there is a very good chance I will be thrown against the closest available car hood, handcuffed in the non-kinky way and hurled into one of those torture cells that don’t let you fully stand up by a mob of lithe, blonde, yoga moms who all became friends via Pinterest.

But, consequences be damned. I have to get this off my chest.

My baby, my beautiful, amazing baby, turns one-year-old in less than two weeks.

OK, Heather, Stacy and Taylor, you can put the handcuffs on now. 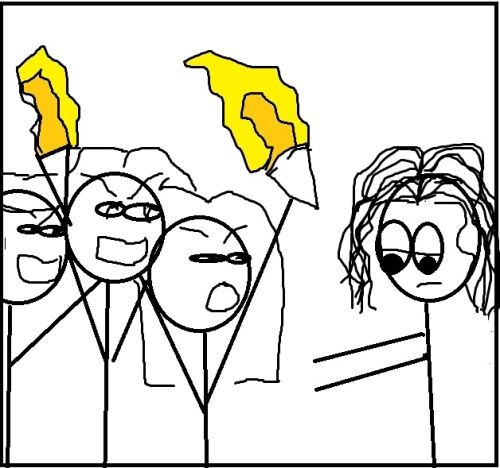 The worst part is that this lack of planning isn’t even something I can blame on the baby. (Although if anyone asks, that’s exactly what I’m going to do. The only reason to have children is so that you have a cherubic-faced scapegoat readily available for any and all occasions).

It’s not like he’s kept me so busy I couldn’t find a spare minute or two to make a list of people to invite. And then write out those invitations. And then plan a menu to feed all those people. And then a separate menu list just for the booze (because I think it’s cruel to invite people to a kid’s birthday party without offering them copious amounts of alcohol as compensation for showing up). And then, like, games or some crap for the people who show up with their own demon spawn. And then bake a fancy, Spiderman-themed, three-tiered, professional-looking cake that according to Facebook every other mom is capable of not only doing but doing while also making it vegan and gluten-free.

Technically, I do actually have the time to do all that stuff if I really wanted to (although it would be a great personal sacrifice considering it would severely cut down on my “X-Files” marathon watching time). And I really do want to celebrate this important event in my son’s life. I mean, he’s my favorite person in the world and I’ve celebrated far lesser events in his life so far, such as the day he got more than half of the green beans on his plate into his mouth as opposed to on the floor.

But the reasons I haven’t planned anything yet are because:

I know, I know. None of that should matter. According to modern mommy standards, I should still throw a huge party complete with organic balloons and artisan party favors and an exotic, free-range petting zoo and little marshmallow Olaf appetizers, even if the invited guests are all non-baby-having grown-ups who probably have better things to do on the weekend.

However, a part of me, the selfish part, would rather celebrate the fact my husband and I kept him alive for an entire year. I mean, my baby did absolutely nothing to help himself get to this milestone. If anything, he worked actively against surviving to the one-year mark.

But even I know it’s wrong to hire a babysitter to watch your baby on his birthday as you two go out to the bar to celebrate your parental prowess.

So, just how will we celebrate Riker’s birthday? I still have no idea. But I’m sure I’ll think of something the day before and drive myself insane trying to put it together in 24 hours.

And then just scrap the whole idea entirely three hours before showtime and text everyone to meet us at Chuck E. Cheese.

Or the closest available semi-kid-friendly bar.