I have never wanted to star in a reality TV show. I have happily hate-watched enough of them to ever wish that kind of scrutiny on myself.

So, imagine my surprise, then, when I had kids and suddenly realized I was one.

Every day of my life now is pretty much the kids binge-watching their favorite reality show, “Keeping Up With Momma’s Sanity.” Followed by the spin-off, “Here Comes Vodka.”

Those adorable little sponges absorb every single little thing I do with their big eyes. And then repeat everything I say with their even bigger mouths (including curse words they “may” have overheard a “certain” parent say).

Which is why I want to be a good example for my children. I really do. I want to be the friggin’ best example of humanity that has ever existed for them. But since that will never happen (I once told my entire second grade class that Santa didn’t exist), I’ll settle for trying to be the best version of myself for my kids.

Here’s who I want to be. I want to be the loving dog owner who is always patient and kind with her aging dog, Buffy. The kind of owner who never gets annoyed with his incessant, loud barking because she knows his eyesight and hearing is going and so every fast movement and loud sound is clearly a gang of pirates attacking the house, which can only be stopped by his heroic barking efforts.

I want to be the loving mother who keeps her cool at dinner when both kids are complaining about the home-cooked meal placed in front of them, even though they also complained about lunch. And breakfast. And every meal the day before. And the day before that. And everything I have placed in front of their mouth holes that wasn’t chocolate since the day they came into existence.

I want to be the confident professional(ish) writer who works hard and leaves a beautiful published legacy for her family.

I want to be the loving wife who definitely doesn’t bury her husband under an angry verbal avalanche of “guess what YOUR children did today?” as soon as he walks in the door.

But here’s who I am.

I am the loving dog owner who patiently tolerates my aging dog Buffy’s panicked barking…up to a certain point. And then I will yell back “SHUT UP, BUFFY! SHUT UP! YOU’RE KILLING ME! YOU’RE *definitely not a curse word* KILLING ME!”

I am the loving mother who once snapped and threw both kids’ dinner plates out the window.

I am the professional(ish) writer who, when suffering from a bout of writer’s block, slams shut her computer and yells “WORDS ARE DUMB” and then hides in the kitchen to shove unhealthy amounts of cheese in her mouth.

I am the loving wife who also assaults her husbands with verbal tsunamis, verbal monsoons and, on one particularly bad day, a verbal tornado (when he was still in the driveway).

It’s enough to keep a girl up at night worrying about whether or not she’s ruining her kids.

But then I remind myself that, from time to time, I’m also the mom who will spend hours every day reading books to her children until they get sick of it (and they never do). And I am Darth Vader Momma, who will have light saber fights with Stormtrooper Riker with one hand while holding Baby Yoda Mae in the other, and even resists the urge to correct her 3-year-old on why this situation goes against “Star Wars” canon. 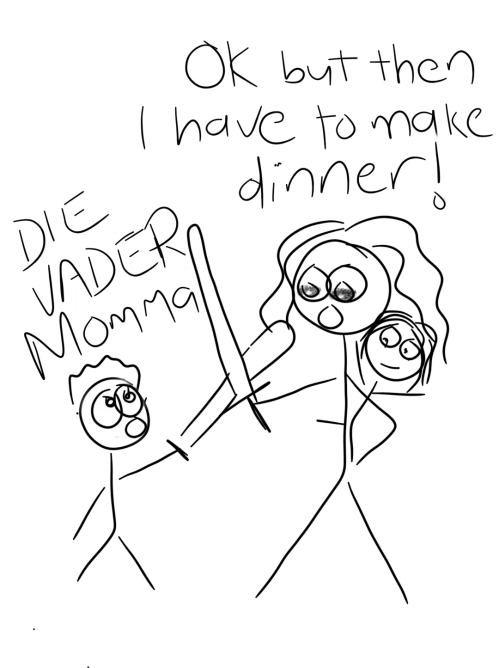 I’m also the loving dog owner who carries her dog up and down the stairs when the temperature drops too low, kicking his arthritis into high gear. And then gives him all the mashed potatoes her daughter didn’t eat because him such a good wittle puppeh, isn’t him? And then quietly cleans up the vomit the next day because his aging system can no longer handle human food.

I am the completely not confident writer barely scraping by who still writes and never stops writing because she loves it. And then fiercely hates it. And then loves it again.

And I am the loving wife who makes naughty stick figure drawings for her husband and hides them in his computer bag.

I am a work in progress. And ultimately, perhaps that’s the best lesson of humanity I could teach my children. That no one is perfect but every day is another chance to be a better person.

Eh…nah. It’d be much better if I was just a much better human overall. One who didn’t eat her kid’s last chicken nugget when they weren’t looking.

But still, every day is another chance to be a better person.