Christmas through the ages

I don’t know about you, but this year I want to celebrate Christmas the way it was always meant to be celebrated: opening presents and then getting day drunk and then eating a huge dinner I did NOT prepare and then dozing off on the couch to the sounds of “A Christmas Story” as someone else does the dishes.

Sounds perfect, no? Except I can’t. I can’t because I’m an adult. And I mean an adult-y adult. None of that “I’m 23 and totally independent even though my parents still pay for my cell phone!” level of grown-up-ness. No. We’re talking “I watched the debates and didn’t even turn it into a drinking game” level of adulthood.

Which means I’m no longer allowed to be the one sitting on the couch wondering how that piece of pie and hot chocolate magically got on my lap. No. Now, I’m the invisible, sweaty, exhausted woman handing the lucky son of bitches sitting on the couch that damn pie that I made from scratch straight out of the box.

See, depending on your age, the holiday season can mean many different things.

As a kid, it’s all shiny, shiny lights and cookies and presents and big, fat men with beards whom you’ve only briefly met but nonetheless are guaranteeing to do everything within their vast magical powers to make sure YOU personally have a very merry Christmas.

As a teenager, it means three weeks off school, the anticipation of your mom finally buying you those “ridiculously over-priced” (her words) pants with the vaguely suggestive word on the rear that you’ll just die without and hanging out with your cool, older cousin with the tattoo at grandma’s.

In your early 20’s, it means one month of never-ending rounds of eggnog and wine and seasonal beer and reddish-looking cocktails with cutesy names like North Poletini and Santa’s Sleigh Bomb at hip holiday parties and festively decorated bars. And then going to your parent’s house where they feed you and give you lots of presents and do your laundry if you ask nicely enough and then give you all the leftovers to boot because you “look too skinny.”

But then, one day you’re married and 30 and BOOM! You realize it’s December but you wouldn’t know it from YOUR house, which still has up an odd mixture of Fourth of July, Halloween and Thanksgiving decor. And it’s all because YOU are suddenly in charge of MAKING Christmas happen. And that’s when you cross the threshold from “this is most wonderful time of year” to “no wonder there are so many suicides this time of year.”

Because now when that massive ball of Christmas lights roughly the size of Utah needs untangled, that angry, throbbing vein is appearing on YOUR forehead, and not humorously on your father’s face. And now when you hear “Silver Bells” for the fourth time before you’ve even had breakfast, it is no longer “festive” but some sort of sadistic audio torture.

Now suddenly you’re Googling how much the going rate for a semi-decent kidney is on the black market in order to afford real presents for your husband, parents, siblings, nieces, nephews, in-laws and even your stupid dog because your husband thinks it’s mean if Buffy doesn’t get at least one chew toy with a bow on it. Because apparently after a certain age, giving out coupon books for “One Free Hug!” is just sad. Not to mention, now it’s a social faux pas to not buy gifts for your mailman, hairdresser, neighbor, boss, co-workers, cousin’s baby, brother-in-law’s dog and the barista who serves you your Peppermint Mocha every morning (even though the barista keeps writing down your name as “Angeilla”).

And while before you always insisted that artificial Christmas trees were just so “bourgeois” and that when you had your OWN home, you wouldn’t be caught dead without a real pine tree, this year your corner is inhabited by a $19.99 three-foot tall fake tree that looks like it died of some horrible fake tree disease in 1974. And then you stuffed it with some pine-scented air-fresheners from your car. Because whatever.

And even though you swore you were going to make gingerbread cookies from scratch this year, two minutes inside the store made you grab the closest pre-packaged desert-like item and SPRINT back to your car out of a not-entirely-unreasonable fear of being attacked by a stressed-out soccer mom with an Elf on the Shelf wearing brass knuckles.

But then, just when you’re about to throw in the towel, just when you are about to stab the shopping mall Santa with a candy cave shiv because you simply can’t take it anymore, BOOM! You have kids. And suddenly the Christmas magic is back. Only better. Because now it’s in technicolor.

Because now you get to watch the tiny people you love most in the world experience all the holiday memories you still hold close in your heart.

And that makes standing in line for 45 minutes just to buy three freaking stocking stuffers completely worth it. 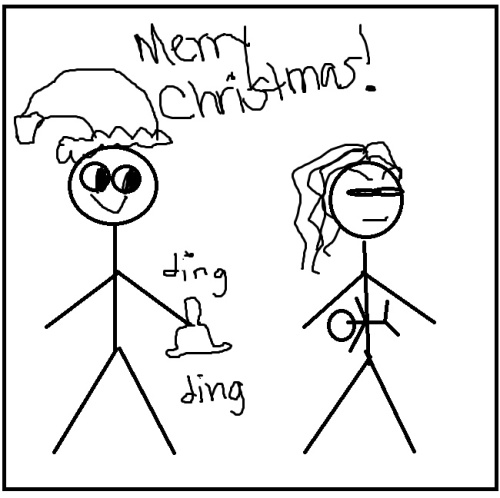 This entry was posted in Family, funny, Holidays, Humor, Parenting and tagged CHRISTMAS AS AN ADULT, christmas is a pain, CHRISTMAS WHEN YOU HAVE KIDS, funny, humor. Bookmark the permalink.

2 responses to “Christmas through the ages”