Diary of a Wimpy Adult

Wanna know a secret? About being a grown-up?

(Granted, some with…ahem…smaller bank accounts than others).

I know! I was as shocked as you are to learn this. As I got older, I kept waiting to finally, officially feel like an adult. But lo and behold, the years kept passing by…18…22…26…29…29 again…the second anniversary of turning 29…and nothing.

Oh sure, there were small changes here and there. Cartoons lost some of their allure while beer gained a LOT of allure.

But overall, I still feel pretty much the same (my encyclopedic knowledge of anti-wrinkle creams notwithstanding).

No…wait. I take that back. There is at least one thing that changes as you transform from kid to adult. While you guys whine on the outside about having to do stuff you don’t want to do, the majority of us have learned to only whine on the inside. So, to you it looks like we’re calmly and diligently paying bills at the kitchen table. But on the inside, we’re all screaming “But I don’t waaaaaaaant toooooooooo…This is soooooo STUPID…I hate iiiiitttttttt…UUUUUUUGGGGGGGHHHHHHH…”

So, just as a heads up, let me give you a list of other annoying crap you’ll eventually have to endure and will continually whine internally about:

Grocery shopping: You know how every time you open the fridge, there is always magically edible food in there? Yeah. When you’re an adult, the only magical thing that happens when you open the fridge is that the green moss-covered leftovers from March haven’t sprouted legs yet. And the only way to correct that situation is to battle traffic, the overcrowded parking lot, the two chubby women who ALWAYS stop in the middle of the aisle to talk about something that absolutely CAN’T wait (like frosting) and then a long line manned by a 20-year-old burnout who physically can’t move faster than molasses or else they die (much like the human equivalent of the movie “Speed”).

Taxes: You know that big essay you’re assigned that counts for, like, 50 percent of your grade and your teacher gives you three weeks to work on it? So naturally you keep blowing it off until 11 p.m. the night before it’s due? That’s how it is every year for us when tax time rolls around. The only difference is that the worse thing that can happen to you is you get an F and/or detention. We, on the other hand, get slapped with “penalties” we will never be able to pay off in our lifetimes and/or jail (which is like detention but without the “Breakfast Club” whimsy).

Cleaning: Oh, you hate cleaning your room? Your ONE room? Aw…boo-hoo. Try having to clean six rooms. And no one gives you an allowance for it.

Going to work: Don’t tell anyone *looks nervously from side to side* but sometimes we fake that we’re sick too. Cough. Cough.

Dealing with bullies: That 3rd grade bully? He eventually becomes the 39-year-old balding, alcoholic bully. That sits right next to your cubicle.

Going to the DMV: Driving is cool, right? Just you and the open road. You and this wonderful machine that stands for the ultimate symbol of freedom. Except for the fact that you first have to go through all the circles of hell, including the Circle of the Eternal Line, the Circle of Finding Out You’ve Just Spent Two Hours in the Wrong Line and the Circle of Dealing With Anita, the Disgruntled Employee Who Hates You.

Insurance: The very first thing you learn as an adult is that you need insurance for everything. Your home, your car, your health, your very effing life. So, you pay thousands of dollars each year to insurance companies to “insure” you should the unthinkable happen. And then, when the unthinkable does happen, they take all those thousands of dollars you paid over all those years and deny your claim to it. Now, you may be thinking, “but wait…isn’t it MY money?” No, it is not. Because the cold sore you had when you went to the emergency room because you got hit by a car means that your intestines, which are currently hanging outside of your body, are now a pre-existing condition and that you are now at fault for the car accident even though you were actually parked at the time and the guy that hit you drove through two houses before hitting you in your parked car.

Grocery Shopping With Your Spouse 101

There are a lot of ways to get to know your significant other better. And let’s face it, no matter how much you think you know, there are always more things you can learn about them. Human beings are vastly complicated creatures. That’s why no one has yet been able to explain why we like sodomizing dead birds with other dead birds in the form of turducken or why we willingly inject poison into our faces so we perpetually look surprised.

For instance, you could stay up all night talking about your hopes and fears, or about that year you experimented with the goth vampire look, or how you voted for Obama but secretly wanted McCain to win so Tina Fey would keep playing Palin for the next four years on SNL. You could take an extended road trip together (as long as neither one of you brings a weapon of any kind along). You could even let each other read the lame poetry you wrote in junior high (shut up, we all know you did).

But nothing, NOTHING, helps you to see into the very core of your partner’s being like grocery shopping together. 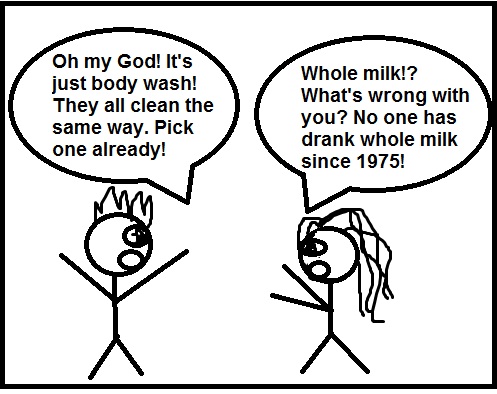 Few other activities can give as much insight into each of your personalities and values. That whole “you are what you eat” is complete bunk. It’s actually “you are what food you buy.”

Take this past Sunday, for instance. Now, normally, it’s my husband who does the bulk of the grocery shopping and this is because I tend to get irrationally angry and downright close to homicidal when I get stuck in an aisle behind some soccer mom who can’t decide between Rago or Prego because while Prego tastes better, Rago has fewer calories and little Suzie doesn’t like mushrooms but hmm they look cut up small enough for her to not even notice but would the four cheese or tomato and basil taste better with the ziti tonight and oh my god, MOVE, YOU PINK TRACK-SUIT CLAD MORON!!!

And he does a great job at it. He even knows my preferred products for all my monthly lady business.

But every once in awhile on the weekends, I’ll tag along either out of sheer boredom or because I’ve had enough tranquilizers to make me relatively harmless toward my fellow shoppers.

And that’s when I discovered that every aisle is a chance to wonder just who the hell is this alien standing beside me.

For example, this is how most of our discourse went:

Him: “Wait, you need a different face cream for day than you do for night? What’s the difference? Don’t roll your eyes at me.”

Me: “You’re honestly telling me you need three 2-liters of Diet Pepsi? At this point, do you just pee pure sugar?”

Me: “Dude, put back that Valentine’s candy or I will saw off your foot off just to give you a taste of your diabetes-filled future.”

Him: “No. NO! Put back the Red Bull. You act like you’re on meth when you drink that stuff and I will not spend another night talking you down.”

Me: “Cracklin’ Oat Bran? That’s the cereal you picked? You have the combined palette of a 5-year-old and my grandpa.”

Of course, there are things we accept about each other without question. He knows that me being a woman means I am programmed to buy any and all food and drink that claim to have “anti-oxidants” in them. And I know that he has a deep, deep love affair with peanut butter that I can never hope to tear asunder. And, believe it or not, there are also even a few things we agree on, such as you can never have too much coffee or wine or cheese.

But the good news is, who needs to pay for expensive marital counseling when you can just work out your issues in the canned food aisle?