I’m losing (not that I’m keeping score or anything)

Considering my ten year wedding anniversary is coming up, I felt I should probably write something about it. Because LOVE! And BIG DEAL! and stuff. So I spent two hours staring at a blank page while deftly avoiding destroying my keyboard with Cheetos finger dust. 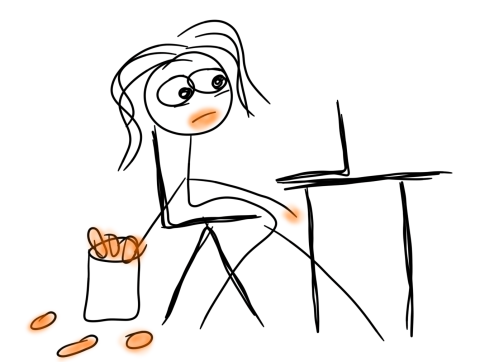 I need inspiration, I eventually says to myself. TO THE GOOGLE. And as usual, it did not disappoint. So many women with very white teeth and very tall boots are just bursting at the seams to tell you all the secrets to their happy marriage. With their blogs featuring pithy titles such as “10 Lessons I’ve Learned in 10 Years in Marriage” and “What Marriage is Like After 10 Years” and “How We Keep the Romance Alive After 10 Years of Marriage.”

You guys ever read a marriage anniversary blog? If not, allow me to sum up ALL OF THEM.

“I married Jeff (or Jason or Jaysen or Jaxon) on a beautiful beach in some exotic locale that you probably can’t afford. And wow. What a journey it’s been. We didn’t know a lot back then but we knew we loved each other.

Make NO mistake, however. It takes work. With his demanding but highly successful career and my vanilla writing that is somehow pulling in six figures and with raising our three extremely symmetrical children, our marriage is far from perfect. I mean, I once almost FARTED in front of my husband! Can you imagine?

No, we aren’t perfect. But we are perfect for each other. We’ve been through so much together, from middle class status to upper middle class status to that time I got bangs. Oof. Through it all, though, we’ve grown closer. Everyone told me when I got married that it would be hard but I love my spouse now more than I did 10 years ago.”

The one thing, however, that all these anniversary blogs agree on (once you get past all the shiny hair photos) is that to make a marriage work you cannot keep score. If you do, the score will never be even and there will never be any winners. Only resentful losers.

It’s one of the few things I actually agree with them on too. Because I’ve been keeping score since Day One and it turns out I’m the resentful loser.

Yeah, I’m LOSING. He is decidedly the better partner. Because I married a handsome overachieving jackass.

My 10 year anniversary gift from him? Three days alone in an adorable cabin in the woods far away from our family. If you’ve ever had small children (or been within three feet of small children) you’ll understand what a tremendous and thoughtful gift this is.

I made him a coupon book featuring drawings of stick figures doing naughty things.

You know what this guy did after Christmas? Cleaned and organized our gross, messy attic. A task I had been meaning to do for half a decade. A task that I had been dreading. A task that was taking up valuable mental real estate in my head. And then…poof! Done. Marked off the list without me having to even ask.

Meanwhile, I once saw a spider in the house and very intrepidly killed it via drowning it in a gallon of bug spray. Did I mention this was on my husband’s desk? And then when he got home after a long day of work, I immediately yelled at him from atop the dining room table “There is a drowned spider corpse on your desk and I need you to get rid of the body and clean up the crime scene!…oh no, sweetie, you’re going to need way more towels!”

He supports my dreams. Even the dumb ones. And I don’t mean in the “yeah, I totally support that, babe!” and then immediately goes back to scrolling on their phone way. That’s my method of support. I mean he gives me the time and space to pursue them.

He’s the less dramatic one. He’s the one with no history of gaslighting. He’s the one who has never made me feel guilty for being human. (And I am deeply, deeply human).

So, to sum up, I got a caring, hard working, supportive partner and he got someone who growls if you try to take the remote away from her.

But at least I’m better at one thing. I am by far the smarter one. I knew enough to not marry a loser.