It never ceases to amaze me how similar talking about raising kids sounds to the plotlines of horror movies.

“I woke up, disoriented, only to discover his face was mere inches from mine, his milky breath washing over me. I screamed while his face twisted into an evil smile.”

“I slammed shut the bathroom door but when I looked down I saw two pairs of sticky hands slowly reaching out for me from underneath.”

“It was a dark and stormy night. I grasped for a diaper but my hand met with nothing but air. With dawning horror, I realized we were out. My terrified eyes met hers and that’s when she unleashed hell from below.”

“The restaurant only had white milk, no chocolate, and there, right before our very eyes, they transformed. Their bodies and faces contorting into inhuman angles and expressions. Where once small children had been were now hideous monsters, their banshee screams filling the night air.”

But that’s the devil’s bargain you make when you create life. In exchange for building a creature of pure adorableness, that adorableness is wrapped around the brain of a psychopath.

This is also why, once you reproduce, there is nowhere to run, nowhere to hide anymore. They will FIND you. Thinking of having kids? Forget reading parenting books. Start with Mary Shelley’s “Frankenstein.”

Homegirl tried to warn us.

Just like in any good horror movie, among the nooks and crannies of my own haunted house, there is now only one small corner I can retreat to when the monsters get too terrifying. Thanks to a heavily fortified baby gate, the kids are barred from entering the kitchen. However, from the vantage point of the baby gate, they can see pretty much the entire kitchen. Which is why, of course, they hang out right there by said baby gate, moaning and growling and straining to get in like zombies if zombies wore duck-covered footie pajamas. 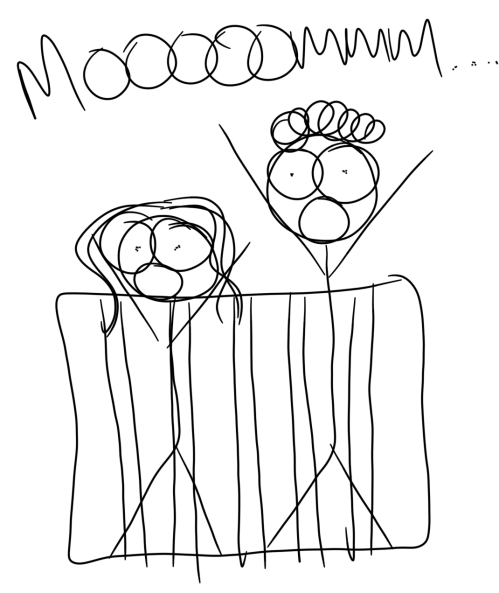 But there’s that ONE corner in the kitchen. It’s dark and dingy and usually dirty BUT they can’t see me.

The first time I discovered the power of this secret corner, I was trying to make dinner. The kids were tired and cranky and out for blood. I was at the end of my rope but couldn’t escape. Or so it seemed.

I reached for something in the fridge, their high-pitched cries making the blood in my veins turn to ice, when one of them shouted “Momma! Where are you? I can’t see you!”

I crouched down and froze. They can’t see me, I thought to myself. Holy crap, they can’t see me. Maybe they’ll stop hunting me if I ignore them long enough. Stop breathing so hard, you idiot! They’ll hear you. Just don’t move. Don’t blink. Don’t exist.

And IT WORKED. Soon enough they got bored and actually started playing with their toys, their devious plans to drive me insane momentarily forgotten.

Because that’s the thing with kids. Or at least my kids. Out of sight, out of mind. If they can’t see me, they start to function like actual humans, able to do things without my immediate presence or assistance. However, if I am in the room, they magically forget how to do even the most basic of things, like operate a blanket and stack blocks on top of each other and hold a book.

Better yet, if I hide out in my dirty little kitchen nook long enough, they’ll eventually get bored enough that they’ll attempt to interact…WITH EACH OTHER.

Which is why I now leave a book or magazine in my corner. I also leave small adults-only snacks back there, like the secret expensive chocolate and Doritos, because Doritos are only for people who can eat ketchup without getting it in their hair. I’m also thinking of having my husband build me a little wet bar back there. I know a recliner won’t fit but maybe a small chaise lounge or something.