Si! In just one week, this Americano has mastered some of the finer points of this magnifico language. In fact, I became so bien at espanol, mis amigos nuevos from Panama even gave me a nickname! “Mujer Estupida.” Muy bonita, no?

Por ejemplo, I learned mucho useful phrases, such as:

Mas of that pink drink with the umbrella-thingy, por favor!

I even learned to roll my R’s when purchasing a pack of Marrrrrlborrrrrro Lights, so as to not sound like just another ignorant tourist.

I also learned mucho cultural things such as:

You must specifically ask if the dish you just ordered still has its eyeballs attached to it. Because apparently it is frowned upon to cry “No ojos! NO OJOS!” while running to the far corner of the restaurante.

If you go up to a vendor at any street market with a $20 bill in your hand and ask how much something is, it will magically cost $20. Every time. Even if the little price sticker on it is clearly marked with $3.

Cheeseburgers are not a universal food.

Si, these past nine days have been wonderfully informative, even in light of the fact I…hmm…como se dice “turned a horrifying shade of deep purple thanks to my pasty white girl skin” en espanol?

Ah, it doesn’t matter. Let’s just say the equator sun is not something an SPF 30 is equipped to take on. 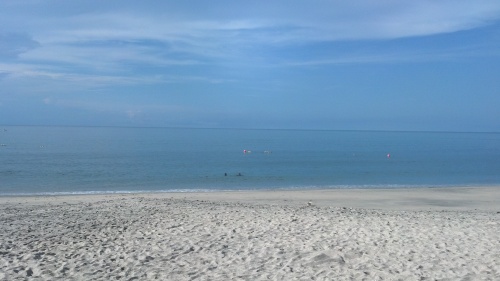 But all in all, it was a muy experiencia maravilloso. In fact, it has made me muy excited to do even mas international travel. Especially since I so obviously am such a bien representative of my country.

See, Americans abroad tend to have a bad reputation for being culturally insensitive and ignorant and stupid, but I like to think I did my part this past week to help repair that reputation, at least a little bit. And I think we can all try to do a bit more to learn about the world outside our borders.

Which is why I fully intend to take the advice of the waiter I met, who told me “La proxima vez, Mujer Estupida (he even knew my nickname!), ir a Mexico y que su problema,” which thanks to my new awesome Spanish skills, I know means “Next time, go to Mexico because they will love your amazing international savvy.”