I know what you’re thinking.

What the hell does a first-time mom who is only six months pregnant know about parenting?

And the answer is, of course, nothing. Well, almost nothing. I do know that the first poop the baby takes once it’s outside the uterus is apparently a mix of dark matter and pure evil, but I only know that because I read too far in my pregnancy book last week.

But after extensive and thorough research where I asked friends who were new parents scientific stuff like “so, does parenthood blow or what?” and “when do babies stop sucking?” and “how much Red Bull and vodka can I chug while simultaneously breastfeeding?” I have gathered enough evidence to debunk the most common myths surrounding this major life change.

Myth No.1: As soon as your baby is born, it’s love at first sight.

Chances are you will not immediately fall in love with your baby. Chances are you’ll look at it and wonder “who the hell is this wrinkled old man who came out of my vagina and what the hell is he covered with?” OK, maybe that’s exaggerating slightly. You could also be thinking “wrinkled old woman.” But the point is, it’s perfectly natural not to feel bonded to your child right away. So don’t worry. You will bond eventually. Possibly even before they go off to college.

Myth No. 2: Breastfeeding is the most natural thing in the world.

Breastfeeding is NOT the most natural thing in the world. Far from it. In fact, Joan Rivers’ face is more natural than breastfeeding. Now, don’t get me wrong. I don’t mean feeding a child from your boob is unnatural (despite what those squeamish arseholes in restaurants that just HAVE to complain whenever a woman dares to use her boob in public for anything other than sexual arousal would have you believe). I mean that in no way does this natural act come to you or to your kid naturally. It’s a daily battle the first few weeks, sometimes months, to get you, the baby and your ginormous boobs all on the same page at the same time.

Myth No. 3: Having a baby will bring you and your partner closer than you’ve ever been.

Maybe it’s the sleep deprivation. Or the ass-numbingly dull tedium of changing diapers every two hours. Or perhaps it’s the immense crushing responsibility of having to keep a small human alive. But you and your significant other will hate each other for awhile and argue about stupid crap such as why lil’ Kayleighanna isn’t wearing socks outside when it’s OBVIOUSLY FREEZING OUT THERE AND WHAT ARE YOU TRYING TO DO, KILL OUR DAUGHTER!?! But never fear. This is why God invented grandparents, so that just when your marriage is about to implode, they can take the demon seed for a night and let you two drink until you can’t feel feelings anymore.

Babies, by nature, are not sweet and nice and innocent. They are terrorists. Tiny, tiny terrorists who refuse to let you sleep or eat a warm meal or sit down or shower or pee or talk on the phone or have a beer or leave the house or wear a clean shirt not covered in vomit. But at least they’re your tiny, tiny terrorist.

Myth No. 5: Babies are expensive.

Babies aren’t expensive. Babies are ridiculously, mind-blowingly expensive.  Whatever crap you bought for your baby, it’s not enough. Because apparently babies die if they are not surrounded at all times by educational toys, soggy baby books, slightly less educational toys that play music, no less than five chairs that all move or vibrate or swing in different directions and 76 blankets.

Myth No. 6: Putting your baby into yoga/music/sign language class will give them a jumpstart in life.

Babies think key rings are the height of civilization’s achievements. It’s OK to wait until they aren’t floppy headed drooling machines to sign them up for Infant Interpretive Dancing. Stop stressing out about their future at Harvard when they’re only three-months-old. 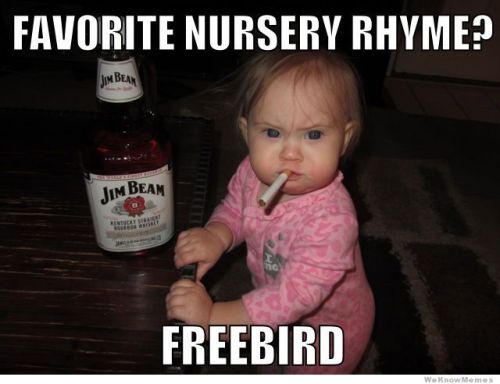 As it turns out, sometimes there is no reason. Sometimes they’re just crying because they’re a butthead. For reasons why they do this, see Myth No. 4.

Myth No. 8: Religiously reading parenting magazines and websites and blogs will help keep you informed and up-to-date.

Religiously reading parenting magazines and websites and blogs* will help turn you into a competitive and paranoid control freak who lectures other parents about how they really shouldn’t let lil’ Pyke play with their iPhone because the latest studies show that children who are exposed to screens within the first two years of life end up being serial killers who work at Wal-Mart.

And everyone will hate you.

*That is, except for this blog. You should always read this blog.