Welcome to Club 30, my friends

Gather ’round, children. Your wise, old Auntie Aprill wants to tell you a story. A story about growing older. A story about turning 30 and accepting that your life is now, in fact, over.

Now, many, many years ago, when I was in school and we used pagers instead of cell phones and lit our cigarettes by rubbing two sticks together, I was the oldest amongst my high school and college friends. Naturally, this meant I was the first one to get my driver’s license and the first one legally able to drink.

As great as that might sound, it did have its downsides. For instance, I spent many months as the unofficial chauffeur to a bunch of squealing teenage girls, shuttling everyone from school to the Burger King parking lot, which is where in our teenage wisdom we decided was THE place to be on Thursday night. This also meant I was the only one without a Whooper, since I spent all my money on gas, which cost an outlandish $1.50 a gallon!

My older age also meant I spent an inordinately large amount of time in bar bathrooms, licking my “21 & Over” handstamp and then pressing it down on my 20-year-old friends’ hands in the hopes it would rub off and they could also pass for 21. I also became insanely adept at slipping off club wristbands at will, which unfortunately does not translate into any actual marketable skill in the real world.

And then we cut to this year, when I was the first to turn 30. So considering one of my best friends just celebrated her 30th birthday this week, I feel it is only right that I pass on the knowledge I have gained since entering this decade of my life.

One of the first things you’ll notice now that you are in Club 30 is that your body becomes involuntarily loud. For example, the other morning I went to hug my husband only to have my elbows crack like a whip ricocheting off a canyon wall. I can also make the exact same noise with my knees when I bend down and my neck should I attempt to swivel it more than 30 degrees in any particular direction. According to my husband, who is 36, these are known among the wiser 30-somethings as the morning creaks.

You’ll also notice that oldie radio stations are now suddenly playing the song you danced to at prom. Worse yet, that rapper you thought was so hardcore now has a reality TV show on VH1 with his FAMILY. And when you saw Lady Gaga in that meat dress, you didn’t think “oh, how avant-garde.” You thought, “man, now I’m hungry.”

Speaking of hungry, your body now clings to every fat cell as though it is its last, even though it actually has TONS of buddies. In fact, you can now gain weight just by dreaming about cheesecake.

Age 30 is also when the media decides to hit you with a barrage of reports about just how steeply your fertility has declined. Oh sure, you may say that it’s probably much more likely that we are just noticing these reports more now. But I’m 99.8 percent sure the media has the birth dates of every childless woman in the U.S. and as soon as they turn that golden number, they go into overdrive to pump out these stories.

“All right, team! You know what to do. Ace, I want that story on the increased risk of birth defects! Scoop, I need that editorial on how older women are selfishly forsaking motherhood for their careers! And Johnny, get me a graphic of shriveled and useless 30-year-old ovaries!”

This is also the age where WebMD suddenly becomes your new best friend. That mole that has been on your back for as long as you can remember? It is now most definitely a sign of skin cancer. And that headache you had this morning? You’re about to die from an aneurysm at any moment. 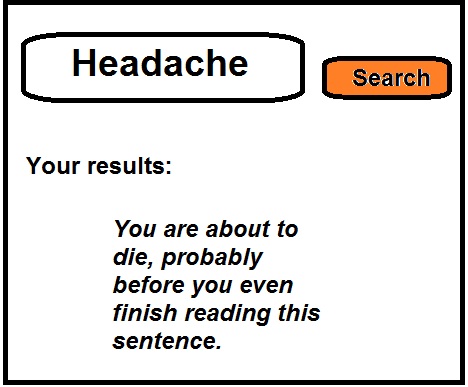 Now, you may be thinking how are you able to keep your sense of humor through all this, Aprill? Well, old age has taught me that life is a tragedy for those who feel and a comedy for those who think, which must be true because I read it off a fortune cookie.

And it helps that the other day I was talking on the phone to a delightful woman in her 90’s who upon discovering my age said “Thirty! Why, you’re just a baby.” Which helped me realize that one woman’s old age is another woman’s zygote.

So perhaps I’m not quite THAT old. I mean, I guess 30 does still sound fairly young.

Yeah, you know what? I am still young. Hell, 30 is the new 20, right? I may have started noticing fine lines on my face but at least two of my major female body parts are still north of the equator. I still have the majority of my whole life ahead me! And cookie fortune wisdom aside, I am still wildly immature in the eyes of any and all Baby Boomers!

So if you’ll excuse me, I’m off to do something youthful and ill-advised and that ensures I can never run for public office.

Right after I Google this weird skin abrasion on my abdomen.