Dear Mommy, life is not a series of memes

The one piece of advice you get the most when you’re a parent (and, not so coincidentally, the one I hate the most) is that the housework can wait, your children can’t. Leave the dishes and spend time with them! They’re only young once! They won’t want to snuggle on your lap for long! A dirty house means happy kids! When they look back on their childhood, they won’t remember how clean the carpet was, but they will remember all those times you sat on that dog hair covered toxic waste dump of a rug and played Legos with them! 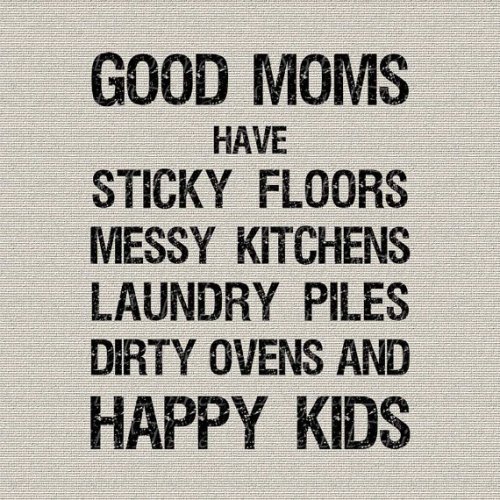 And on and on, etcetera, etcetera.

In theory, this is solid advice. Any quality time you can spend with your precious little minions is utterly priceless. As that other overused phrase goes, you will never be this loved again. So enjoy it. Even those confusing little made-up games they always want you to play that have no rules based on Earth logic and involve an Elmo doll, 37 tiny cars and a Snickers wrapper.

So, yes, those dishes CAN wait.

I mean, have you ever spent time with small children? These are creatures born with the innate ability to turn a normal, inhabitable house into a “Hoarders” episode within a mere 24 hour cycle. And for some of the more gifted ones among them, they can do it in 15 minutes. One quick trip to the bathroom and you leave a living room that is “cozily chaotic” and return to “holy crap, we’ve been robbed.”

Making it even worse, this never-ending plea to ditch the housework and play “Barbie vs. the Tupperware Monster” for three hours straight is not coming from well-meaning people with real life experience. It’s being shoved down your throat anonymously in the form of the saccharine sweet meme. 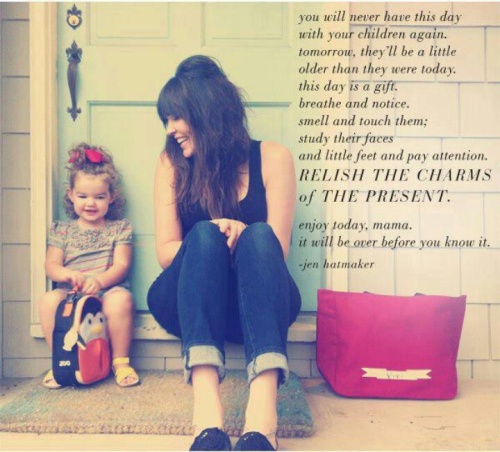 There you are on Facebook, just trying to innocently see if your old friend Piper is still a hot mess so you can silently gloat, and BOOM! You’re visually assaulted by a stock photo of a size 0 mom and her baby running through a field of lilies with the passive-aggressive words “Play with me, Mommy!” slapped underneath in a fancy font.

But just because something makes a good meme doesn’t mean you should base your life on it. If we did, we’d have a whole generation of Scumbag Steve’s. And I don’t know about you, but there are no fields of lilies close to my house and even if there were, my toddler would want to plop his diapered butt down immediately and use a stick to poke a dead leaf for five hours. Put that image in your meme and see how quickly it goes viral.

Worst of all, this type of advice ignores the most common and hard-wired aspect of every child’s personality. No matter how much time you spend playing with them, they want more. It’s never enough. They are tiny imagination junkies and as such, will use all sorts of manipulation to make you think you’re neglecting them when you choose to do laundry instead of playing Candyland for the 104th time. Hell, I still remember forcing my grandma to play card games with me for HOURS as a kid, which the incredible woman DID, with a smile on her face no less, and I STILL got upset when she had to stop so she could make me dinner.

So all this “grown-up stuff can wait, go on a picnic instead!” crap pretty much just serves to make you feel guilty. Which is wrong on many levels but the most important one being the fact that parents are already living in a perpetual state of guilt. Guilt that you’re doing everything wrong. Guilt that you fed them a hotdog for breakfast this morning to avoid a meltdown. Guilt that you didn’t start a college fund for them when you were 15 (which is the only way you would be able to afford college for them). Even guilt over the fact that some days you’d prefer dental surgery over one more mind-numbingly dull game of Hi-Ho Cherry-O.

The last thing exhausted parents need is an unrealistic expectation about what parenthood actually is. Because it’s not sitting in a beautiful meadow while you braid flowers in your child’s hair. It’s sitting on their bedroom floor and trying to pay late bills online while they stick G.I. Joe’s in your hair that you haven’t washed since Tuesday.

Having a child is personally the best thing that has ever happened to me. But it didn’t stop the world from turning. Which is why tomorrow we will go on a picnic. And then we’ll head home, where I’ll plop him down in front of “Sesame Street” so I can finally scrub that weird fur off the tub so the next time he takes a bath he doesn’t get a weird fungus.

This entry was posted in Family, Humor, Parenting, Pop Culture and tagged a dirty house means happy kids, annoying memes, cleaning can wait mommy, cleaning when you're a parenting, funny, humor, life is not a meme, parenting memes, play with me mommy. Bookmark the permalink.

3 responses to “Dear Mommy, life is not a series of memes”