A closer look at the American family

The American family. A tradition dating back to the early 1600s. They can be found living among various habitats in North America, from teeming cities rich in natural resources, such as Chipotle, to the peaceful suburbs, where powerful tribes known by the moniker of “The Homeowners Association” roam the land, dictating grass length and the number of acceptable lawn gnomes. Utterly unique in the animal kingdom, these creatures can easily be identified by their colorful plumage, having decorated their bodies with various diaper bags, oversized purses and backpacks featuring a “Dora,” a small-statured explorer with a bowl haircut that is worshipped among the youngest of the herd.

The American family is among the most social of all the mammals (except when it involves the subject named “Debbie;” the female of the species isn’t talking to “Debbie” this week…further extensive research has concluded that “Debbie” knows what she did). They often gather for elaborate eating rituals, where animal flesh cooked on a primitive device known as a barbecue, usually by a male of the species named “Dave,” is consumed in large quantities and the young engage in playful romping that involves murderous screams.

Let us take a closer look at this fascinating species, focusing on a newly formed American family that recently had its first offspring. 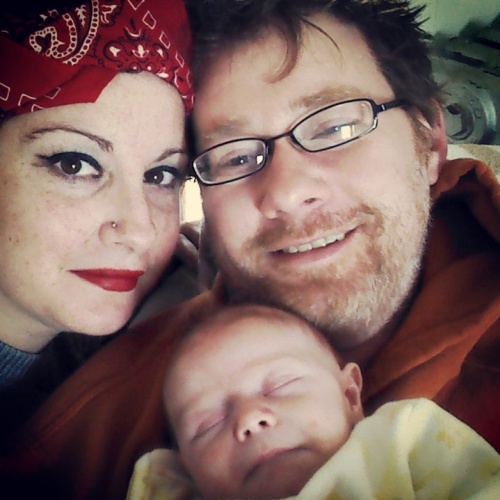 Like many American families, this one began with marriage, a tradition in which rings are exchanged and the technology known as “Netflix” replaces formerly vigorous mating rituals. After three years of this marriage, the male of the couple impregnated the female by seducing her with his elaborate mating call of “Hey…you wanna…you know?”

The gestation of the pregnant female is nine months, during which both the female and the male eat copious amounts of food, a biological response to the upcoming months of starvation they will face once the offspring is born and they no longer have time to forage for food in the kitchen.

For this particular American family, the bulk of the child-rearing duties falls to the female, whose personal hygiene has taken a backseat to ensuring that the offspring survives.

Her day is also spent guarding the child from dangerous predators, such as the family dog, who lurks on the periphery waiting for its chance to attack the child with never-ending licks directly inside the child’s mouth.

The male of the species, after a long day of hunting for editorial approval and gathering fonts, arrives to the shared dwelling and is greeted by the female hurling the offspring directly at his face while she retreats to the bathroom, where she will curl up in the fetal position on the floor and call her best friend to engage in a ritual known as “venting.”

Left alone with the offspring, the male attempts to keep it entertained until he notices the female crawling across the floor army-style toward the front door, where the following conversation takes place:

Male: “Where are you going?”

Female: “To the grocery store.”

It is at this point that the clock strikes seven and the male is filled with trepidation. For it is at this time that a unique phenomenon known among the natives as “the witching hour” begins. Although no one knows why, some biological urge within the offspring’s DNA causes it to cry and scream nonstop at this time every night, often to the point of vomiting (it being a well-known fact that the young of the American family are nauseated by the sight of a nice button-up shirt). Note, if you will, how former techniques used during the day, such as the “bouncy-bounce” knee maneuver and the “Look! It’s Mr. Giraffe!” distraction method are now useless against the growing tide of cries.

Exhausted and confused, the male will often resort to trying to use logic with the child, but so strong is this biological urge to cry at heretofore unheard of decibels, the child ignores his pleas of “come on, buddy, no need to get that upset”. Eventually running out of ideas, the male will often resort to simply letting the offspring cry, often crying alongside him.

It is at this point that the female generally returns, after first standing outside the front of the dwelling repeating the mantra “I can do this, I can do this” for five minutes. But the storm is over. Just as quickly as it began, the witching hour ends and soon the exhausted offspring is fast asleep.

And the male and female celebrate another successful day of child-rearing by drinking fermented grapes and vowing to never have any more offspring until the first offspring has graduated college.

3 responses to “A closer look at the American family”