Brunchers in the Mist

(Alternative title: “Don’t get your panties in a brunch”)

Boston. The urban jungle. A wilderness teeming with exotic species and, at times, dangerous terrain (the Pedestrian/Vehicular Civil War has been raging in the region since 1934).

For the past two years, I have lived among the wildlife naturally found in this part of the world, in an effort to study and document their behavior and way of life. After several months of careful observation, I have come to discover that the creatures found here are much more varied than first thought.

Among the numerous species found in Boston (such as Manic-Depressive Sports Fan, Drunk Sorority Girl and Angry Hobo), is a most curious mammal known as the Native Bruncher.

The Native Bruncher is a result of centuries of evolution and combines the urban dwellers’ natural instinct to flock together on the weekends and their natural aversion to any type of exertion. From what I have gathered in my research, the habits of the Native Bruncher serve on both a medicinal and social level.

While for most of their week, the Native Bruncher forages for food among the alleyways and corners of their habitat, the main caloric staple of their diet is morning-appropriate cocktails and ironically named omelets featuring a fascinating combination of cheeses. The Native Bruncher will drink and eat these items on the weekend until they have amassed enough calories to tide them over for the next five or six days, where they lapse into a hibernation-like state known as “The Work Week.”

Although the history of Brunchers has never fully been documented, it is believed that the very first brunch was held in 1753 in England when a hungover Lord Hamish Cottington Hammingford the IV woke up late one Sunday morning and found that he was too late for breakfast and too early for lunch at the local pub.

Flabbergasted, the proprietor asked him what he would like to eat: breakfast or lunch?

His response changed the course of weekends as we know it.

“Hmm…well, eggs sound good, but so does steak. Or perhaps pancakes. But then again, a big sandwich might be nice. You know what, how about you just bring me a crap load of all of that. And some ale mixed with something fruity and topped with no less than three fruit garnishes.”

This unique mixture of food caught on immediately among the hungover-impaired peasantry, prompting Lord Hammingford to declare “I shall call it ‘Lubreakfanch!'”

Luckily, his wife, who was slightly less inebriated (having only had four fruity ale cocktails, as opposed to seven) suggested changing it “brunch.”

Eventually the ritual spread throughout Europe and by 1829 was brought to America by a traveler named Chet Avery, who in some academic circles is also believed to have been the first hipster on record and the inventor of what we now call “the soul patch.” Avery was also an avid proponent of the healing effects of alcohol to combat the negative effects of alcohol and making it a staple of the brunch ritual. 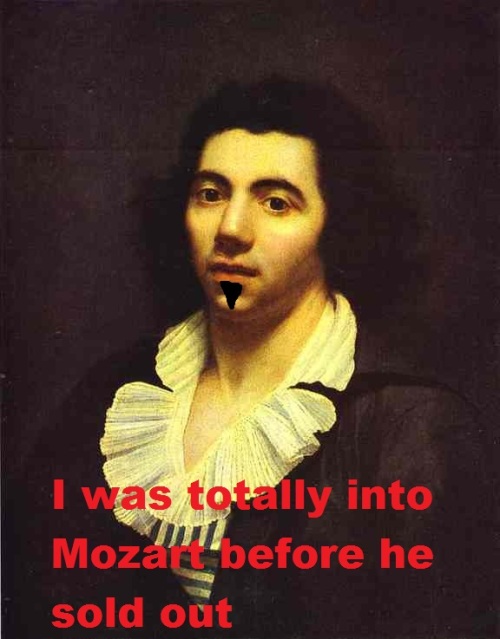 While Brunchers can now be found in urban jungles all over the world, they seem to be most populous in Boston (although Native Brunchers from Portland and Brooklyn would probably categorically disagree with that statement in a pompous voice while barely looking up from their iPhones).

The Boston breed of the Native Bruncher is also unique in its penchant for “theme” brunch, such as Disco Brunch and for being the first successful species to have brunch on the water (the 1974 sinking of a ship in the early days of this tradition, dubbed “The Bacon-Flavored Tea Party,” notwithstanding).

What separates the Boston Native Bruncher from other species who practice brunch-ery is the way it has honed its skill and timing in arriving to brunch before the phenomenon known as “the rush” begins. For example, if the species known as “Newbie” arrives to brunch promptly at 11 a.m., they will find that particular watering hole already teeming with Native Brunchers. The “Newbie” is then likely to give up, bowing down to the alpha herd, and will then head to a much less trendy watering hole where the eggs are much less fancy.

A close cousin of the Native Bruncher, known as the Permanent Resident Yet Non-Native Bruncher, can also be found in large quantities in Boston. They are easily spotted on the outskirts of the herd, waiting until the Natives have finished and then getting whatever scraps are left over. At times, the Permanent Resident Yet Non-Native Bruncher can wait up to four hours, tiding itself over with screwdrivers and Bloody Mary’s until they are finally allowed to feast. This is also where the Fanny Pack Tourist species can be spotted as well.

Typically, brunch lasts for two to three hours for all of the species, although on certain occassions it can last until 2 a.m. depending on the individual Bruncher’s capacity to ingest large amounts of alcohol for many, many hours straight.

As for what the future holds for the Native Brunchers and their ilk, no one can be certain, especially considering the encroachment of chain restaurants on their native land. But the most current scientific research suggests that mimosas will be involved no matter what.

This entry was posted in Humor and tagged best place to get brunch, Boston, brooklyn, brunch, brunch cocktails, funny, hipsters, portland, portlandia, standing in line for brunch. Bookmark the permalink.