Cheering on the Boston Marathon, one beer at a time

The Boston Marathon. A living testament to dedication, endurance, skill and no short amount of pain (and possibly permanent damage).

Naturally, of course, I’m talking about the livers of the spectators who begin drinking while the runners are still stretching.

Having only lived in Boston for a little over two months now, I felt it was my duty as a new resident to check out what goes on during Marathon Monday that they don’t televise. Thanks to a tip from the Tweeter (I owe you one @BostonTweet), I decided to start my day at the American Craft bar, which was on the marathon route and, more importantly, was opening up its beer garden at 10 a.m.

Feeling a bit sheepish (and dangerously close to a lush…well, more lush-ish than usual), I had reservations as I stepped off the train. I mean, what would people think of me as I ordered booze that was not the universal before-noon acceptable drink of Bloody Mary?

But that feeling quickly melted away as I realized I had absolutely nothing to worry about. As soon as I sat down at a prime spot (the early bird catches the worm in the bottom of the tequila bottle it seems) and ordered a screwdriver (hey, at least it has orange juice in it, I figured), groups of others quickly arrived and sat all around me, ordering everything from beer to shots of whiskey.

They say New Yorkers will come to opening of an envelope. If I’ve learned anything during my relatively short time here in Boston, it’s that Bostonians will make a drinking game out of it.

And so, there we sat, when suddenly a cheer erupted from somewhere, gradually making its way down the street to us. The first of the wheelchair division was making its way toward us.

Now, I’m not usually one for being sentimental. But watching everyone stop what they were doing, whether they were in the beer garden or just walking down the sidewalk, to cheer them on, made me feel, well, downright sentimental(granted, that feeling could have also been related to the second screwdriver).

By my third screwdriver, the first of the elite men’s division was passing us by and by this time, throngs of people were making their way to the sidelines. The cheering never stopped.

Realizing that if I continued drinking the way I was, I’d be lucky to be awake past noon, I paid my bill and made my way closer to the action. By this time, the sidelines were packed with people, everyone from families to the group of 20-somethings who were not-so-discreetly carrying around red Dixie cups filled with “juice.”

The sense of excitement, regardless of your soberness level, was palpable. Being the country bumpkin that I am, I had never experienced anything like this before (unless you count the time my husband and I accidentally stumbled into a re-enactment of the Alamo in San Antonio…like literally were walking down the street with the period dressed actors until we realized what was going on).

Hearing the encouraging cheers (even the drunken, slurred ones) and seeing the city come together like that was truly inspiring. 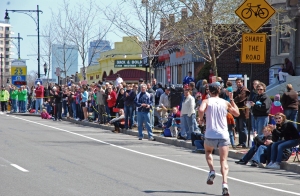 In fact, as I rode the train home (which was an adventure in and of itself…by my count, three drunks almost got run over), I started to think how much I really wanted to be a part of this great event, more than just getting my buzz on and using it as an excuse to daydrink. To think that there’s so many people out there that aspire to complete this Herculean task, sacrificing and training for months, made me want to be among their ranks next year. Seeing the entire crowded subway car cheer when a runner who completed the marathon got on only fueled my new resolve.

Besides, those screwdrivers aren’t going to drink themselves next year.

3 responses to “Cheering on the Boston Marathon, one beer at a time”